At the end of this post we’ll answer that question.

It’s one of my favorite pics from our #DateMe Photo Booth EVER. But first…

This Week’s Audience Was Out Of Control!

In an AMAZING way.

Every week we feature our favorite moments from the previous week’s #DateMe audience, posing the question, “Would YOU Date Our Audience?”

We’re pretty sure the answer is YES. Because they’re Hilarious!

We had submissions via:

Read on to see it all. Who knows. YOU might be featured!!!

Here Are This Week’s Audience Favorites… 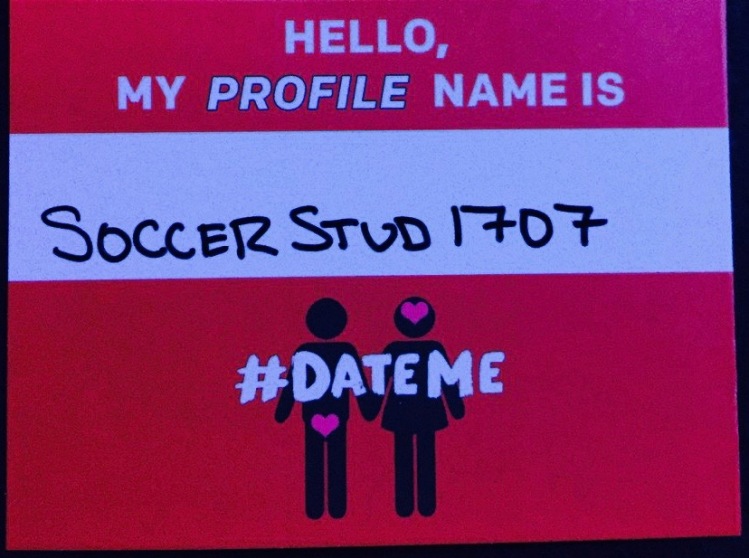 Hey, soccer studs are generally hot. So I’m into this name.

Or were there really 1706 OTHER Soccer Studs before him??!?!

But my favorite profile name goes to… THIS GUY!

HAHA! Also, this could be inappropriate, but he’s in a long term relationship. And honestly one of the nicest, most genuine people we’ve met so far.

We chatted for a long time after the show. And Dana fell in love…

Got a couple good ones this week.

Love the line. And his phone’s READY!

HA! Okay, kinda gross. But I LOVE the way too cute expression on her face!

This next one was sent to us via Snapchat. 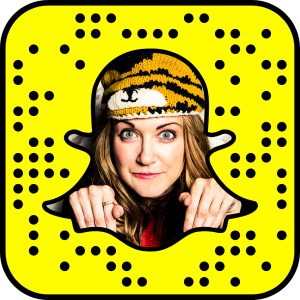 Then send us your Snaps!

CAST Pic Of The Week

Okay. I know we’re supposed to focus on the audience here, but our cast is just too darn cute! Here is my favorite pic of the week. Photo courtesy of Dana Robie.

The cast gets an hour between shows on the weekends to hang backstage. Torian found a ridiculous wig and tried it on. Kimberly joined in and they became… Audience Volunteers Of The Week

This week we feature: 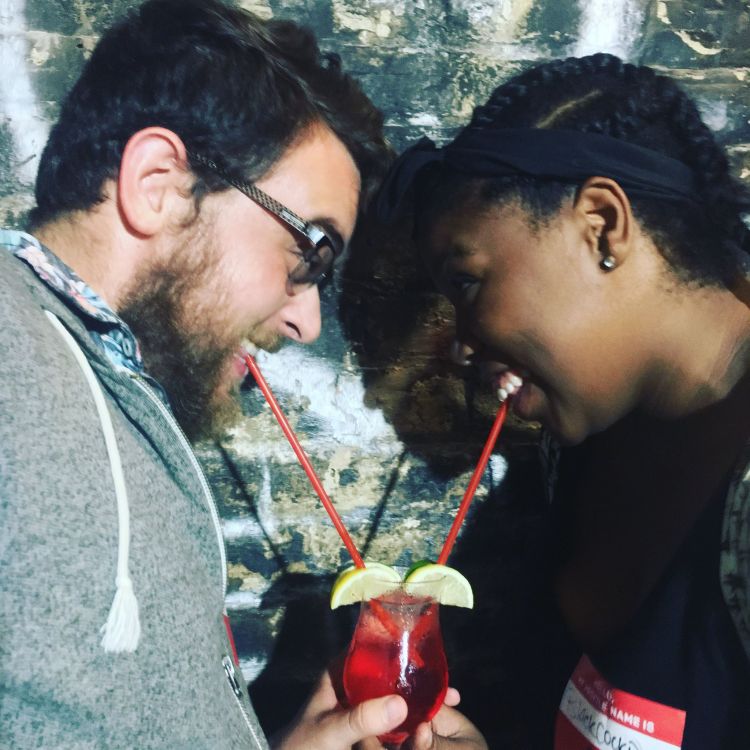 They’re adorable in this pic. But the improv interview during the show is what sealed the deal.

When asked to come up with their profile names we got “McNuggets” for Vince.

Now Rachel’s was a bit more complex. She had previously listed in her 6 Things You Can’t Live Without “obviously, dicks!” So when our host Greg asked her friends to come up with her Profile Name they blurted out “BlackCockDown”!

The audience erupted into applause and the cast even gave a standing ovation. One of the funniest names we’ve ever had.

And we mean Crazy in a GOOD Way. Every weekend is a surprise at #DateMe.

At the 8pm show last Friday we had Hannah “hotstuff11” and Justin aka “Mike Jones”. Which made everyone Die laughing because it was so random, given his name was… JUSTI.

But WAIT. Who did we catch earlier in the audience…?

It’s Mike Jones! And he’s giving us the finger!!! A different kind of finger. And we’re not sure what it means. But, hey, we’re all about YES AND, so we’ll go with it.

And Then Things Got Weirder…

We Love meeting audience members down at the 1959 bar after the show.

Sometimes the audience volunteers we match up during the show continue their bonding at the bar. Here’s Adam “Adamsville” and Robyn “ChutesAway69” continuing their love affair!

And as the drinks are flowing we meet some Interesting people!

Here’s the cast/crew hanging with China and Ashley.

They Loved the show and told us a lovely story about how Ashley met her wife through OkCupid over TEN years ago!

And then things got interesting… 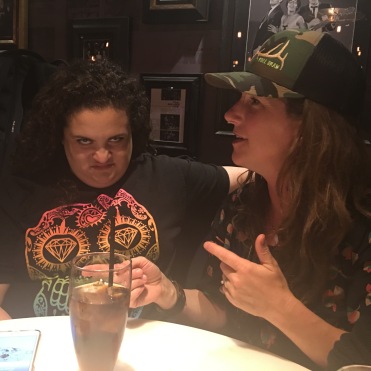 And reached for the Group Water bottle!

WHAT?! This actually isn’t the first time this has happened. At least she’s having fun!

NOTE: Dana’s expression in the above pics is just a bit. We were truly enjoying the convo!

Then Ashley decided it would be a great idea to Paint Her Nails??!!

But, again, we’re all about YES AND so Dana joined in.. 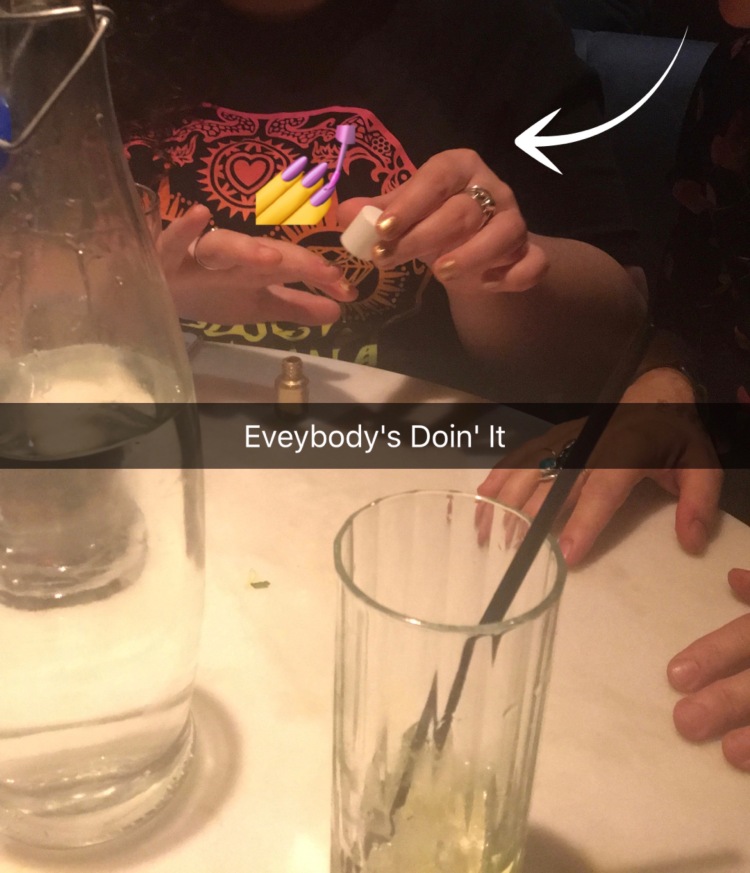 But, seriously, these ladies were great. And Tons of fun! It’s always an adventure at 1959.

As always, I’ll close out this post with some of my favorite photos from the #DateMe Photo Booth this week.

Audience Pic Of The Week!

Aka How Many People Can You Fit Into A PhotoBooth?

And Not all of these people know each other!

At our Friday 10:30pm show a group went into the Photo Booth. And then another group joined. Then another…

Before we knew it we had this Giant Group Picture just because people were having fun!

Looks like our Audience knows how to YES AND, as well!

See You This Weekend!

Come to the show and YOU may be featured. Stay tuned next week!

And comment below with any of YOUR favorite pickup lines, profile names, awkward dating stories, or pics!

2 thoughts on “How Many People Can You Fit In A Photo Booth?”

I'm Robyn Lynne Norris, the creator of the live comedy show #DateMe: An OkCupid Experiment. I'm overly emotional & I believe in love. If you're reading this site, I probably love you. Maybe not in THAT way. Love can mean many things. Don't make this weird. Xoxo

My Tweets
Follow Stories from the Creator of #DateMe: An OkCupid Experiment on WordPress.com